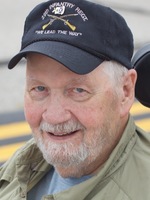 Born 01-15-1931 in Columbus, Ohio to the parents of Wray Buell Van Voorhis and Elizabeth Nadine (Garwood) Van Voorhis preceded in death. Brothers John Paul and Merle Thomas Van Voorhis preceded, as well. Wray was married to Alice (Pahl) Van Voorhis and loved for more than 56 years until her passing in 2010. She kept him going when life became difficult. Wray was hard working, as a young man, delivering newspapers during the WWll. He was a youth neighborhood volunteer during WWll making sure all houses blinds were closed at night on his street. Summers he was selling thousands of dozens of ice cream bars from a 3 wheeled bicycle, yummy bike. His famous quote is “Ride your bike real slow and ring your bells real loud”. If you go too fast, the kids don’t have time to run and get a nickel from Mom. Wray graduated from North High School in Columbus, Ohio in June 1948. Attended Ohio State University Sept 1948 to Dec. 1950. He enlisted in the Army and did his basic training with 101st Airborne in Breckenridge, KY. He served with the 29th Infantry Regiment, US Army, as CPL; active duty from 23 May 1951 to 5 May 1953 in the Korean, serving for 18 months in Okinawa and one month in Hong Kong. He returned to Ohio State University Sep. 1954 to Dec 1954, after military service, majoring in General Business Transportation. He worked all his adult working years in the trucking business, starting as a Rate Clerk, his ability to type over 100 words a minute on manual typewriter, talking and smoking at the same time served him well. Positions he held: Traffic Manager, Terminal Manager, Vice President, and Salesman in both Columbus and Cincinnati, Ohio. Wray served on the Federal Civil Defense Administration on the Transportation Board in Columbus, Ohio from the late 1950’s to early 1960’s.

Wray was afflicted with Multiple Sclerosis at age 26. Attributing to his long life, with the disease, was his tremendous positive attitude. Hobbies were fishing, boating, camping with family, scouts and telling stories. He never met a stranger. He could strike up a conversation about life with anyone, in any situation. Wray was treasurer of the of the United Cerebral Palsy of Cincinnati. He was a Cubmaster in Boy Scouts for many years. He served on committee in the Boy Scout Troop 485 for 30 years in Sharonville, Ohio. He was proud member of Sharonville Kiwanis for 30 years and served as president of the local chapter for 2 years.

Wray was always proud of family and extended family. As his body began to fail, slowly over the years, he said he had two speeds, slow and slower. He was a constant reader and he could climb the highest mountains, in his mind.