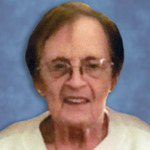 Marcia L. Schmid passed away on July 17, 2019 at the age of 83. She was a proud, life-long resident of Ann Arbor, Michigan. Marcia graduated from Ann Arbor High School in 1954 and would continue to be very involved with friendships she formed during her time in the Ann Arbor public schools. She worked on multiple class reunions for the Class of ‘54 and was gifted in organizing events throughout the years for her class.

She married Walter “Wally” E. Schmid in November of 1966. Together they had two sons, Kevin and Karl. She began working for the Michigan Bell Telephone Company in 1954 and enjoyed luncheons with this group of ladies for decades afterwards. She was a happy volunteer for programs at Haisley Elementary and Forsythe Intermediate School, where her two sons attended. She eventually became a fixture at Haisley as a “lunch lady,” serving as a supervisor for the whole lunch program.

For many years, Marcia was involved in various bowling leagues and supporting her husband’s work with his bowling leagues and charities through the Ann Arbor Elks. Marcia enjoyed traveling up north to visit friends in Lake City and also trips with her mother, sisters, and cousins to Mackinac Island and other points “over the bridge.” She was a member of the Pittsfield Senior Center where she enjoyed Wii Bowling and potlucks.

In 1997, Marcia became “Oma,” German for grandmother, to Abigail Schmid and was thrilled when Ethan became Abigail’s baby brother in 2001. Marcia gladly attended countless concerts, plays, basketball, and softball games to cheer them on over the years.

She is preceded in death by her parents, Donald and Marjorie (Kett) Rayment and her husband, Walter Schmid. She is survived by her sons, Kevin and Karl (Kathryn); her grandchildren, Abigail and Ethan; her sisters, Sandy Schulz and Marsana Lovell; her nephews, Ron (Jill) Schulz, Don (Maxwell) Schulz, Brandon Lovell; and numerous cousins and friends.

A memorial gathering will take place at Nie Family Funeral Home, 3767 W. Liberty Road, Ann Arbor, on Saturday, August 3, 2019 from 10 am until the time of the memorial service at 12 pm.

A private burial of cremated remains will take place in fall.