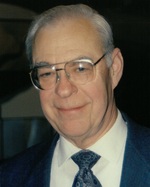 Fred had enjoyed a lifelong career in radio and television at the University of Michigan. He was also a leader in international video standardization efforts, and in the production and distribution of educational television programming that helped with the establishment of PBS, the Public TV Broadcasting Service in the U.S.

Fred was born on May 20, 1929, in Washington, PA, to Edythe Rosemary Yorke Remley and Frederick Marion Remley. Signs were present from an early age that Fred would be an engineer. He grew up in the early 1930s in the little town of Wayland near Grand Rapids, Michigan. There the young Fred loved watching telephone operators linking callers at a complex switchboard that was in fact located in the front room of his family’s home, where his father worked as district manager for the telephone company. At the local train station he was fascinated by the telegraph keyboard and its clicking code. He puzzled through Popular Mechanics magazines long before he could read, and started building radios and amplifiers at an early age.

Fred went on to enroll in the University of Michigan in 1948. He did engineering work for Michigan Bell in Detroit during the summer of 1949. That fall, on campus, Fred and his West Quad roommate Sheldon Gates started a dorm-to-dorm wired radio hook–up to send music via clandestine connections they established in the University’s underground steam tunnels. The soon-popular “station” metamorphosed into WCBN, the campus-based, student-run FM station that continues to this day.

As a student audio engineer at the University, Fred inched his way above the ceiling of Hill Auditorium to hang microphones for Sunday morning organ broadcasts by Prof. Robert Noehren. The program was carried nationally on WJR-AM, Detroit’s clear-channel radio station. Fred soon became a federally licensed broadcast engineer and worked during the summer of 1951 at WKMH AM/FM in Dearborn.

Fred received his B.S. degree from the University of Michigan with a major in physics in 1951. He had aimed for a career in nuclear physics, but while still an undergraduate he had become involved with the then-new University radio station, WUOM-FM. He worked there as a broadcast engineering intern, helping with the Speech Department’s radio and TV classes. These moves led to his lifelong career at the University, as well as to his international work in video standardization.

Fred met his future wife, Anne Gardner, while working in student radio program production. They were married in 1952 and lived in Ann Arbor for over 66 years. The couple built a hillside home in Ann Arbor’s west side, where they raised two children. Their son Paul Gardner is a professor of English, specializing in Medieval Studies, at the University of Washington in Seattle. Daughter Kate (Catherine Anne), an electronics engineer, is a senior researcher at NIST, the U.S. National Institute of Standards and Technology in Boulder, CO.

In 1954, Fred was placed in charge of the construction of the University's first television production center as Chief Engineer. During a 42-year career at U-M, he went on to manage the construction, equipping, and technical operation of numerous media facilities, including the University’s Flint TV station, three FM radio stations, two comprehensive University TV production centers, as well as on-campus TV facilities serving labs and classrooms. His work on medical facilities at the University Hospital enabled video analysis and instruction in surgery and in-patient care. In 1982, Fred was appointed Director of Michigan Media's production facilities on Ann Arbor’s west side in a former Argus Camera factory building that had been renovated for educational video production. Today, hundreds of educational films and videos produced by the University Television Center -- Michigan Media -- are part of the Bentley Historical Library's collection.

Fred was an early adopter of computers and computer programming in his life and work. He became interested in digital technologies in the late 1970s, and was an early user of the vaunted Apple ll for graphics, word processing, programming, and contributions to the Journal of the Society of Motion Picture and Television Engineers (SMPTE). When in 1988, the U-M closed the west-side TV Center, he joined the University’s Information Technology Division (ITD), serving as a video specialist there until his retirement in 1993.

Fred is internationally known for his work in negotiations concerning global standards for video recording. His involvement originally began in 1959, when the National Educational Television and Radio Center (NET-RC), then housed in Ann Arbor, received a multi-million dollar grant from the Ford Foundation. The grant enabled the purchase of video recorders to be installed in colleges and universities throughout the U.S. to facilitate distribution of educational video. The U-M Center for Information Technology (CITI) supported this effort and sent Fred to educational institutions throughout the U.S. to advise on how to install and utilize video recorders—first, the early kinescope, film-related machines, and then, the newly emerging videotape recorders with broadcast-quality images. Local U-M professors, and their cohorts in other U.S. colleges began developing and sharing informational material widely. Over time, this sharing, supported by NET, was a key element in the process that led to the development of a national public service TV network, the Public Broadcasting System (PBS). Fred continued to contribute to the effort through his long and active membership in the PBS engineering committee.

During the 1960s and 1970s, Fred helped to establish international standards for video recording. He served as a U.S. delegate from SMPTE and chaired international committees that aimed to agree on technical standards to facilitate the sharing of TV content worldwide. In support of this goal, a global organization, the Consultative Committee on International Radio-Television (CCIR), convened representatives of broadcasting networks, companies, and professional organizations like SMPTE in a succession of deliberative meetings that ultimately took Fred to nearly 20 countries on four continents.

Together with other SMPTE officers, Fred participated in a groundbreaking engineering and cultural exchange between the United States and China in 1979. “In a sense, that trip changed my life,” he said. “Not only was the experience rewarding because of the exchange of technical information, but the exposure at first hand and in depth to a culture combining the ancient with the new and to customs and ways of thinking far different from ours certainly resulted in a broader perspective and a more comprehensive world view.”

In 1979, in honor of the global standards effort, Fred accepted an Emmy award from the National Academy of Television Arts and Sciences on behalf of SMPTE for excellence in TV technology and engineering. His work in video recording standards continued through 1995 as he chaired committees in the U.S. and abroad under CCIR and the International Electrotechnical Commission (IEC).

Fred also served as SMPTE vice president and as a member of its Board of Governors, and, for many years, as chair of the Board of Editors of the SMPTE Journal. He was awarded a SMPTE citation for outstanding service in 1987, the SMPTE Progress Medal in 1990, and the Eastman Kodak Gold Medal in 1995. He was made an Honorary Member of the Society in 1991 and Life Member of the Institute for Electrical and Electronics Engineers.

Fred’s love of computing followed through his retirement years when he edited the newsletter of the U-M Retirees Association, and upgraded his own Apple technology. He remained an active and engaged enthusiast of electronic technology to the end of his days.
Retirement years also saw frequent travel to visit offspring, including son Paul (Fiona Robertson Remley) of Seattle, WA and daughter Kate (Dylan Forrest Williams) of Boulder, CO. Family vacations continued at the Lake Michigan seashore near Sleeping Bear Dunes National Lakeshore, their longtime locus for camping, as D.H.Day State Park.

Throughout his life, Fred also indulged a passion for photography, begun in childhood when he took photos for a real estate company near his Royal Oak home. His photographic activities continued through his overseas trips, with years of intensive darkroom work, and finally, digital production. His travel prints long adorned a wide swath of his living room walls.

The enjoyment of classical music was another abiding pastime. Fred and Anne held season tickets to the University Musical Society’s Chamber Series for decades. They were often joined by daughter Kate who flew in from Boulder to enjoy string quartets in Rackham Auditorium.

Fred was pre-deceased by his parents, and by his brothers, Richard Yorke Remley and Allyn Streeter Remley. He is survived by his children Paul and Kate, and by Anne, his wife of 66 years, as well as by devoted nieces Karen Remley Onufer and Erin Remley Donnelly, and nephew William Sawyer, with other relatives around the nation.

Fred will be greatly missed by all who knew him. A memorial will be held in Friends Meeting House, 1420 Hill Street, on Saturday, November 9, from 4-5 p.m. The public is cordially invited.