Obituary for Demetra A. Anastasiou (Kambelos) 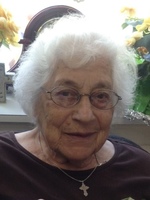 She married to Evangelos (Angelo) Anastasiou (who preceded her in passing in 2009) in 1946 (62 years). Their families struggled to survive the death, destruction and starvation of the brutal German occupation during WWII. Their trust in God and their Greek Orthodox faith sustained them and in 1950 Angelo immigrated to the U.S. and was joined in 1954 by Demetra and their daughter Panoraia.

Demetra was a devoted wife, mother and home maker. She was a gifted cook of a variety of Greek foods and was known for her wonderful pastries. She was also a gardener with a green thumb having both vegetable and flower gardens at their home in Maysville, Kentucky.

Demetra and Angelo were sustained by their faith and taught their children by example their devotion to God. They traveled one and a half hours most every Sunday to their beloved Holy Trinity-St. Nicholas Greek Orthodox Church in Cincinnati where they worshipped our Lord and Savior and also enjoyed the fellowship of koumbari and good friends through many decades.

Demetra is survived by her children, Panoraia ‘Perry” (Christos) Katsikas, Maria (Harry) Kokkinakis, Peter (Elena) Anastasiou; and adoring grandchildren, MaryAnna Kokkinakis, Demetra (Demi) Anastasiou, Evangelos (Evan) Anastasiou and Rena Anastasiou. She is also survived by her brother, John (Erato) Kambelos; her nephews, Dr. Peter Kambelos and Stratos (Hope) Kambelos; her grand-nieces, Sophia and Gabrielle Kambelos; and also loving family in Greece and Australia. Demetra loved all of her family with all of her heart. She will be greatly missed. She was preceded in death by her parents; sister, Maria Flaskis; brother, Nicolaos Kambelos; and niece, Athena Pekris in Greece.

In lieu of flowers, the family requests that memorial donations may be made to the St. Nicholas Greek Orthodox Church Iconography Fund; 3109 Scio Church Rd, Ann Arbor, Michigan 48103.