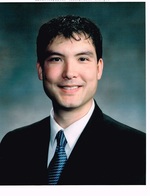 Aubin Jeffrey Chang
of Ypsilanti Michigan
Age 45, passed on Monday, October 14, 2019. He was born February 11, 1974 in Royal Oak, Michigan. He graduated from Cranbrook Kingswood in 1991, received a Bachelor of Science degree from Eastern Michigan University and a Juris Doctorate in Intellectual Property Law from The University of Toledo College of Law in 2008. He was a Product Manager at Questel in Fort Gratiot, Michigan. Aubin was a member of the Ann Arbor Dueling Society, and Blue Water Fencing Club in Port Huron. His final épée fencing bout was at the Renaissance Fair in Holly, Michigan. An erudite logophile, he was known to have a scintillating sense of humor and a brilliant wit.
Survivors include his wife, Delia Yrlas Chang, his stepson, Victor Roman, his sister Melissa (Kevin) Thompson, his mother, Sylvia Meloche Chang, and his nieces, Isabelle and Lucia. He was preceded in death by his father, Chih-Ming “Ben” Chang.
The family will receive friends at the Nie Funeral Home, 2400 Carpenter Road, Ann Arbor on Friday, October 25, 2019 from 11:00 a.m. until the time of the memorial service at 12:00 p.m. In lieu of flowers, memorial contributions may be made to the Alzheimer’s Association. To sign Aubin’s guest book or to leave a memory, please visit his personal page at www.niefuneralhomes.com.